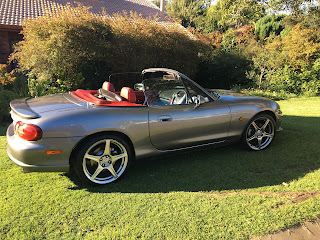 I sold it to a bloke in Melbourne for $7000 more than I paid for it three years ago, and it arrived via truck yesterday and was collected by the new owner this morning.

He phoned me and told me he was wrapt in the car. I'm glad. He bought it sight unseen, based on my description, and I would have felt bad if he had been disappointed.

I sold it because it had ceased to be an object of enjoyment (although it remained a lovely little thing to drive) and had become an artifact to be preserved. This meant that every time I wanted to drive it, I was considering how many kilometres I would put on it, and how that would affect its value.

The fact that my degenerating spine (a consequence of humping a military load in and out of choppers and for ten weeks at a time fifty-one years go) was making it increasingly painful to access its cockpit was also a factor.

Whilst all low-kilo NBs are holding their value well, this one, because of its Jasper Conran interior, is a collector's item. It probably should be on display in a museum, and a car like that is no good to me. Cars are for driving, not looking at.

I researched its replacement carefully and looked online for the most sensible and practical low mileage Japanese sedan with a manual six-speed gearbox. I found a 2013 Mazda 3 with 40000kms and (as the cliche goes, one lady owner). I bought it from a dealer, taking advantage of my TPI GST free concession. 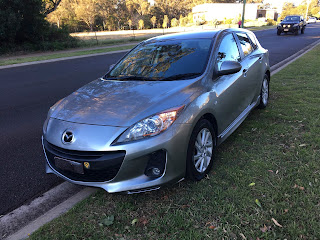 The plan was to deliver the MX5 to its new owner in Melbourne and to collect the Mazda 3 from the dealer and bring it back to Queensland.

Then the lockdowns happened.

In the end, the buyer had the MX5 trucked south, and I had the 3 sent north. Shortly before my car arrived in Pinkenba (the Brisbane depot of the logistics company) SE Queensland was locked down, and I couldn't pick it up without being quarantined at home for two weeks, so I had to shell out for the Brisbane-Toowoomba leg.

So the savings I'd made buying GST free were canceled out by the trucking costs. The car should arrive home today or tomorrow.

The blog will remain, despite the lack of an MX5 to write about. It will continue to cover matters motoring.