Despite the title, this has nothing to do with music, and it isn't about my MX5, but it is car related, so what the heck...


I'm garaging my daughter's Toyota Echo whilst she's overseas, so decided to spend some time (but little money) on cleaning it up a bit.

My daughter looked after the car well prior to travel, but backed it into hidden garage door stop some time ago. The car looked original apart from that, and the fact that over time, the wheel trims had gone missing.

Toyota Echo wheel trims are cheap and plentiful, so I picked a set up from a local wrecker. The same wrecker had some Echos in stock, although none of the correct Winter White colour, so I collected a rear bumper and a lower valence in a silver tone.

The original intention had been to find a wreck the same colour, so painting could be avoided, but there were none around locally, unlike the situation when I rejuvenated my son's Toyota Camry a few years ago.

The whole shopping expedition cost $80, so the "little money" bit was achieved.

Next step was to remove the damaged bits.


I found some youtube videos which ostensibly showed the way, but they all cut out after the retaining bolts were removed. At this point, the bumper bar stubbornly refused to separate from the subframe, so I was stuck.

Browsing through a second hand bookstore (the lockdown encourages this type of time filling) I found a Haynes Repair Manual for the Echo. Finding this particular book was, to say the least, a fluke, but it became clear after quick reference to the manual, that the bumper was held on by plastic clips, and you simply had to exert force until the clips cried "enough".

Toyota has a thing about plastic clips...

Anyway, once I was aware that brute force was required, and it wouldn't damage anything, the job became straightforward.

The weather turned nasty halfway through the process which slowed things down a little, but the result was pleasing. By the time I'd bought the paint and manual, total costs were about $100. A panel beater would have probably quoted at least $750.

Next job is to restore the headlamps. They've gone yellow through age. 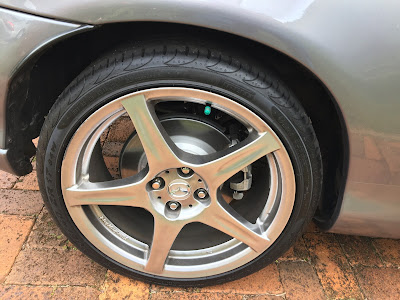 Being stuck at home by the dreaded virus has allowed time to create some improvements.

The first (and most expensive) was a complete brake overhaul. The car has always stopped well, but I began to notice some juddering through the pedal with sustained heavy braking, such as the descent of the Toowoomba range.

Pedders (No Bull) did a comprehensive, if expensive job of completely overhauling the system, including replacing both front and rear rotors.

They also aligned all four wheels, and replaced the clutch fluid, jobs which didn't leave much change from $1000.

It's been worth it, as the car is much more pleasant to drive, as a consequence of the alignment settings. The appearance has also been improved by the new rotors. 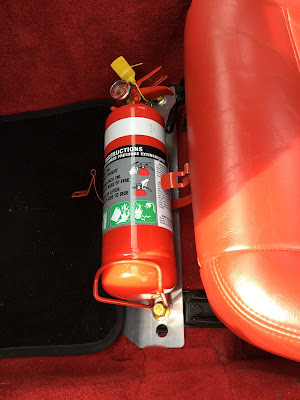 I had, for a long time, intended to mount a fire extinguisher in the cabin, but hadn't been able to source a decent mount. Eventually I found one for $40 from MX5 Mania, and installed it without too much trouble, although I had to source slightly longer bolts to attach the bracket to the passenger seat mounts. 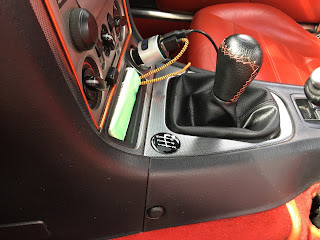 Finally, the gear lever boot had cracked, so I found a replacement at Automotive Plus in Aspley, and installed it without hassles. You'll note the re-covered gear lever knob, which cost me $50 at a local bootmaker.

I'm still trying to source a factory cruise control from the USA, but no luck so far.
Watch this space.

In the shutdown, my SE has been a source of entertainment and relief from boredom.

Here is a video of a local brief drive.

I'm an amateur at this, so forgive the camera shake and wind noise.

It was posted by kiapenna1 who was selling it.

In that he/she was successful.

I'm posting it because it is almost identical to the first car I owned. Back in 1966 I bought a 1956 Volkswagen 1200 from a used car dealer in Caloundra. I had saved my earnings from holiday jobs such as tobacco picking and delivering mail.

From memory, it set me back two hundred pounds. I have no idea whether that was good value or not, but it was unmarked, rust free, and it was just what I was looking for as a student teacher needing basic transport.

Looking back on it, I had no strong preference for make or model at age 19. I had learned to drive on a Morris 850 which belonged to my cousin, and passed my (rudimentary) licence test in my father's EJ Holden.

On the whole, it was a reliable car, although it chewed up a differential bearing not long after I acquired it, which drained my meagre savings.

I used it initially to drive daily to teachers' college, and weekly to drive the 70kms home to Landsborough most weekends. Post graduation, it took me home to Texas (Queensland - not USA) and to teaching appointments, first at Inglewood, and then Goondiwindi.

It came to grief halfway through my first year at Goondiwindi when it put a valve through a piston, as a consequence of the cooling fins on one of the cylinder heads being clogged with dried mud after an adventure in a flooded creek.


I put a long motor (out of a Kombi) in it, and drove it until I traded it on another Volkswagen, a 62 model, after a month or two.

The second beetle was OK, but it somehow lacked the mystique of the first one. They are a remarkable piece of engineering.

This US model differs in the positioning of the steering wheel, the presence of bumper overriders, and the parking lights and indicator setup. My car had pop-out trafficators, which I replaced with indicators mounted in the door pillars. where the trafficators had been. 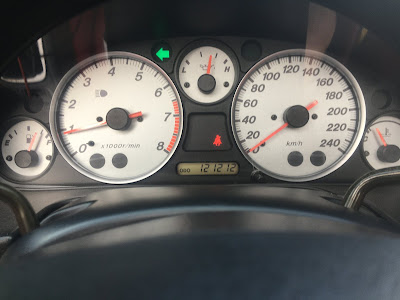 This set of digits has an intriguing pattern, although that's not why I posted it.

The clicking over of 120000 kms is significant.

It marks a couple of milestones, one being that I've put 10000 kms on the odometer since purchase of the SE in September 2018.

The other is that I've actually spent some dollars on cosmetic restoration - $1500, in fact. This paid for a respray of the front bumper and the hardtop. The bumper was showing all kinds of gravel rash, typical for an MX5 of this vintage, and I had the hardtop sprayed maroon, a darker shade than the original cherry red.

Choice of colour is always a matter of taste, I suppose, but I chose this over respraying the top the same colour as the rest of the vehicle. which was my original intention.

I also had the rear wing resprayed, as it had deteriorated from (I think) sun damage. The finished job is excellent, and together with a windscreen replacement (which cost me nothing via insurance) has lifted the appearance. It's not concours, but is pleasing.

The car is now pristine, paint wise, and exhibits a striking interior which matches the hardtop. The upholstery wear (call it patina) doesn't bother me, and I feed the leather regularly.

I've also taken to using the hardtop only when parking in unsecured areas, which given my pattern of use, is not often. I've never been entirely happy with its fit, and it is noisy. At low speed, it creaks and groans no matter how it is adjusted, and at high speed, the wind noise is a problem.

Driving with the top down is the way to go, especially early in the morning, but my dermatologist, after observing my comprehensive skin damage from a misspent youth, demands that I put it up when in bright sunshine.

The only other improvement I'm considering at this stage is cruise control. The US Miata came with it equipped, but when I made enquiries about importing a kit, I discovered that they are incompatible with RHD, because of complications with the brake pedal fitted to the Oz version.

This means I'll be looking for an after market version, something discrete that doesn't compromise the originality of the vehicle.
Posted by 1735099 at 3:17 PM No comments:


The Cerato is sold, and now this is the "family" car.

It's a Kia Rondo (called "Carens" in most other markets, and they're no longer sold in Oz.
That cessation of sales should not be an issue, as the vehicle, like all Kias these days,  comes with a seven year warranty.

These things have the same running gear (motor, transmission, steering, brakes etc. as the Cerato, but have a different body.

Dimensionally, they're the same length and width as the Cerato, but much taller. In that respect, the Rondo resembles an SUV, with an elevated seat height and much easier passenger access.

That's why we bought it. We're both at the age where entry and egress is an issue, and in this car it's a doddle, compared with most small hatches. There are other advantages, such as increased luggage capacity, and a better driver's view because of the elevated seating position.

This particular specification (The "S" - although it's sporty in name only) has a third row of seats, although they're really only suitable for children. We have folded them down, and put a dog-liner in the rear. We can harness the dogs to the rear most seat belts, and they can travel in comfort and safety back there.

The car was a demonstrator with 10000 kms on the clock, and finding it was a hassle. There was nothing local, so we had to use a Kia dealer in Brisbane.

It drives very much like the Cerato, but is quieter, roomier, and has slightly later tech.

Kias are always well-equipped, and they are also well put together. I guess if you're going to warranty your product for seven years, that's a given.

But the best thing is that it's not an SUV.

Why pay to cart around a lot of extra metal?

It comes with a couple of accessories, namely a reversing camera installed in the rear vision mirror, and a tow bar which has never been used.

It has the balance of Kia's 7 year warranty.

Check the photos and email me on 1735099@gmail.com if you're interested. 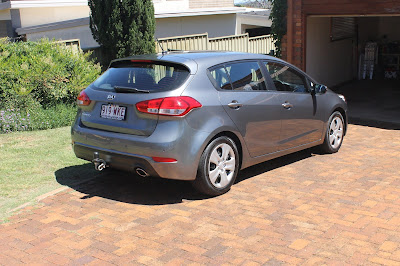