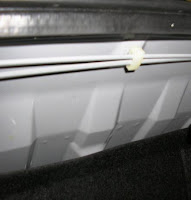 After returning from our expedition to the Granite Belt, I noticed a distinct tinny rattling noise which emanated from somewhere to the rear of the car.

It sounded like it was coming from the boot, and I found it to be a great source of irritation.

I began to try to identify the source. It wasn't the exhaust system. After risking third degree buns, I discovered that it was attached as per specifications.

Next I took all the gear out of the boot (space-saver tyre, wheelbrace and jack). It looked as if the wheelbrace was contacting the jack in its cradle, so I packed a piece of towel around and between these two items. It made no difference at all. Plink-plinking continued.

Because the noise began to be heard after our Granite Belt trip, I racked my brains (this didn't take long) to think of anything unusual we did on this trip. Apart from drinking a little bit more red than usual, I was unable to recall anything significant. In any case, the quaffing of red wine and driving the MX-5 have always been mutually exclusive activities.

Then I remembered. We had to pack the boot pretty tightly. At the top and rear of the boot cavity are two very slim torsion bars held in place by a plastic clip.

A close inspection showed that these two skinny rods had separated from the plastic clip, and were merrily "plink-plinking" every time the car hit a small bump. Stuffing soft gear into the boot to the brim must have dislodged them.

The remedy was simply to put them back in the clip.