I've always used a dashcam on the MX5, for a variety of reasons, but notably after an encounter with a bogan suffering road rage.

Unfortunately, the more expensive units I've purchased over the years have invariably lasted about 12 months, so I bought a cheapie the other day.

I reckon that if I have to replace it often, at least I won't be shelling out much of the hard stuff.

Anyway, it works, although the image quality is poor.

It does the job well enough if I need recorded evidence of road rage effected bogans.
Posted by 1735099 at 7:44 PM No comments: 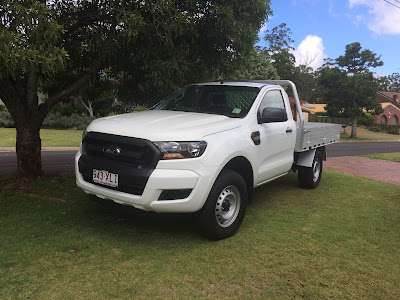 I'm a member of a select group - one of those drivers unfortunate enough to have bought (new) an LW Ford Focus equipped with a Powershift transmission.

In almost every respect, it's great little car. The transmission, however, lets it down big time.

We've been luckier than most, as ours hasn't ever left us stranded roadside, as has been the case with many owners, but the juddering and surging exhibited by the transmission when it gets hot, is beyond a joke.

Anyway, Ford has been taken to court by the ACCC, and this seems to have concentrated their corporate mind somewhat.

This week, it went into the workshop for two days to have the tranny pulled, and a complete new (ungraded) clutch fitted. This is the second time this has been done. First time, there was a slight improvement, but it wasn't cured.

Since picking the thing up yesterday, driving it is a completely new (and more pleasant) experience. I dare to hope that Ford have finally got the problem sorted.

None of this has cost us any money, but it's not ideal when you spend big dollars on a new car which doesn't perform as advertised.

All of this is not, as it happens, the point of this post. The pic might give it away, but I wanted to give you a brief road test, gentle reader, of the loaner car Ford gave us for the two days we were without the Focus.

The loaner car turned out to be a loaner truck, a 4 X 4 Ford Ranger.

It was a large beast, cumbersome to park because of the length of the tray, but was very easy to drive. Uncannily, it actually felt a little bit like the Focus because of the standard Ford cockpit setup, including Sync, cruise control, and Ford HVAC.

Once cruising along it was quite refined, although the ride with nothing in the tray was pogo like. It is well equipped, well put together, and you can clean it out with a hose if you must.

My only major gripe was the fuel filler. It's relatively inaccessible under the side of the tray, and the locking cap refuses to give up the key unless it's locked.

Think about that. It means that when you refill it with diesel, you have to find somewhere to put the cap with the key in it (and all other keys you may be using as well). It's bloody fiddly, and would drive me slowly nuts if I owned it.

This style of vehicle is very popular, and the scourge of supermarket car parks because of their length.

In their natural habitat (building site, farm gate or when towing) they're very practical, but I'm glad I don't need one.